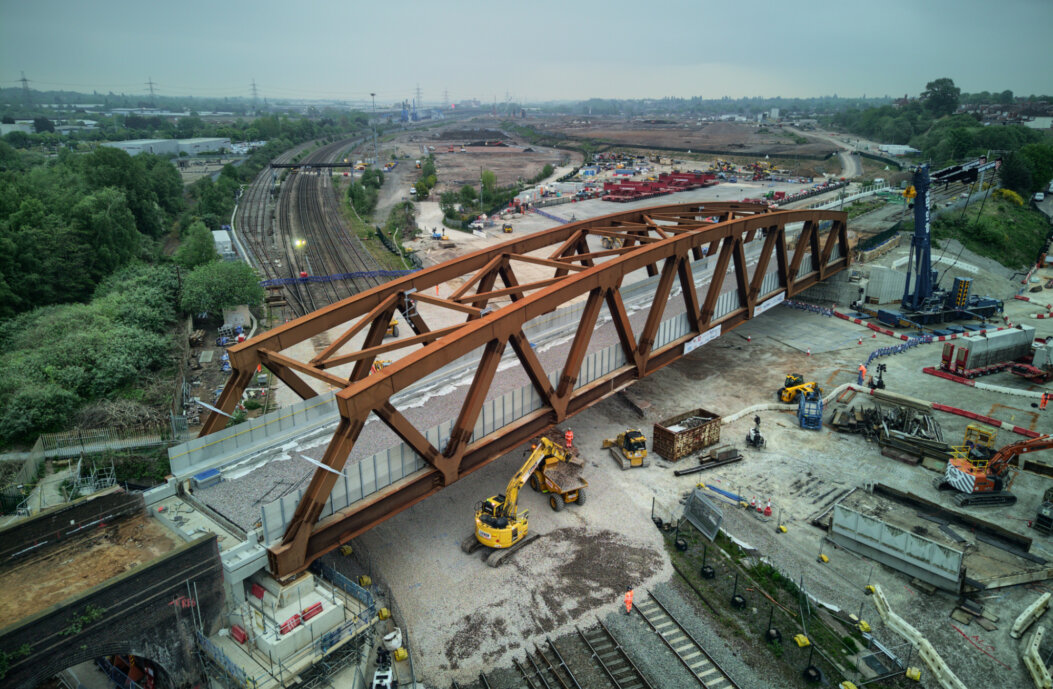 The SAS13 bridge replacement project is a key route for freight and local people which is situated near Birmingham City Centre on the Stechford to Aston (SAS) rail line and will be an enabler for HS2.

On behalf of Network Rail, main contractor Skanska demolished the eight-span of an existing nine-span viaduct. Skanska, along with Severfield replaced the existing viaduct with a new single span bridge weighing a total of 2,600 tonnes.

The 92-metre-long replacement bridge consisting of 1,095 tonnes of weathering steel was built offline, jacked up to a height of 5m from a build height of 1.5m. Skanska then carried out fibre reinforced composite (FRC) work adding a further 1600 tonne to the bridge before being jacked to the installation height of 7m and installed using 18 Self Propelled Modular Transporters (SPMT’s) during a blockade of the Birmingham to Derby line on 7th May 2022.

This rail over rail bridge will pave the way for the new HS2 line approach into Birmingham City centre and the planned HS2 Midlands Maintenance Depot. This new structure will ensure Britain’s new zero-carbon, high-speed railway HS2 works in coherence with the existing rail routes into the UK’s second largest city.

Constructing the bridge onsite reduced the carbon emissions and cut the number of lorry movements along local roads, therefore minimising the impact on the local community. This combined with offsite fabrication and the use of ground granulated blast furnace slag also supported the carbon reduction.

Working collaboratively alongside Network Rail, HS2, Skanska, other project partners and the local community meant that the complexity of the project from design to engineering to installation was achieved successfully, on time and safely.