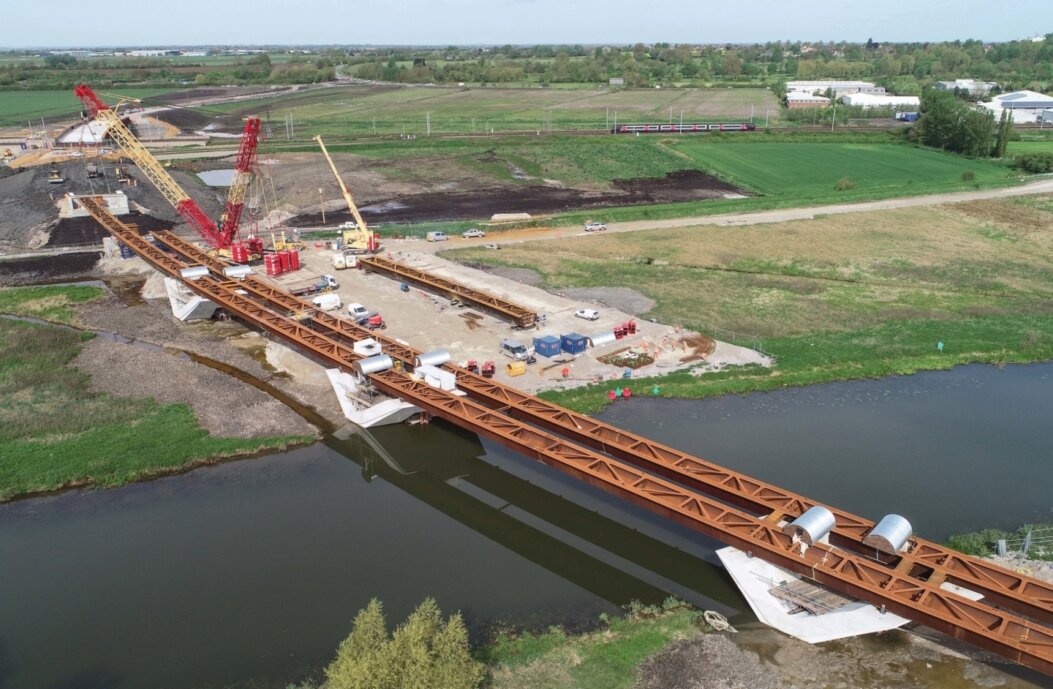 The bypass is a 1.7km road arching around the southern edge of Ely. It includes composite steel bridges over a railway line, the River Great Ouse and its floodplains.

There are two main structures, a rail over-bridge and a road bridge involving 692 and 1,138 tons respectively.

The rail over-bridge was manufactured in sections at our Lostock facility and delivered by specialist hauliers to site. Here, they were pre-built next to the scheme into three main sections of up to 36 meters in length. These sections were then lifted into position in three lifts of 75 tonnes each during overnight possessions.

Across the viaduct there’s also a cantilevered walkway built of weathering steel for pedestrians to enjoy terrific views over to the spire of Ely Cathedral. The walkway consists of two ramps that link and transform into a feature walkway over the river with a viewing platform.

For the rail bridge we required a 750-tonne crawler crane. This crane was delivered in smaller sections to the pre-build location before being assembled by a smaller 100-tonne slave crane.

At the same time, we also had to rig and build a 400-tonne crawler crane, ready to lift the eastern viaduct sections into position over the river. Once complete, it was de-rigged and set up again on the west for the western viaduct sections to be constructed. We installed structural tie bars within the concrete piers, built with a ‘hook and eye’ design, to maintain tension at the top. The rail bridge was then jacked down onto its permanent bearings and handed to the client ready for the concrete deck to be poured.

All together, the viaduct consists of 12 sections, ranging from 75 tonnes to 109 tonnes each and we had a team of up to 14 welders working in sequence in order to allow for the bridge to expand and contract during construction.

The area around Ely station could get heavily congested with lorries and other larger vehicles not being able to use the low underpass. Therefore, the bypass will help to relieve these problems, ease congestion in Ely and reduce the need for traffic to pass the railway station, meaning the level crossing can be closed.